Press Enter to Search
…working with space
Design has a relationship to its surroundings: described by its enclosure of solid and void; contemplating its form; creating a variety of spatial experiences, ranging from the intimate to the monumental. Design is the tool, space the reference.

mxmxm = m³
…working on different scales
Design is not limited to a certain scale. Design as an approach can be applied again and again with the same sensibility. Projects can differ from the creation of an object to the layout of an urban master plan. Design is the tool, scale the reference.

mxmxm = macro meso micro
…working together
Perspectives can only be broadened by collaboration. Projects should not be constrained by any one discipline. Concurrences happen out of coincidence, shared interest or necessity. Design is the tool, you are the reference.

Studio mxmxm is an art and architecture studio founded by architect Jason Slabbynck. Studio mxmxm was officially established in 2020 but the first projects date back to 2012, just after the graduation of Jason Slabbynck as an architect. The studio focuses on making comprehensive projects, on different scales, that trigger transformative experiences. Those projects – from theatre scenography to architectural installations – sometimes require active citizen participation (THE LIQUID WALL and A/MAZE/ING), often include new technologies (such as the LED technology used in the music theatre performances MONU and TINKLING I) and always try to be readable to a large public. Our goal is poetic reflection and community building, provoked by an honest, minimal and innovative design. By collaboration for each project with different people/organizations, studio mxmxm always seeks a multidisciplinary approach broadening the perspectives. 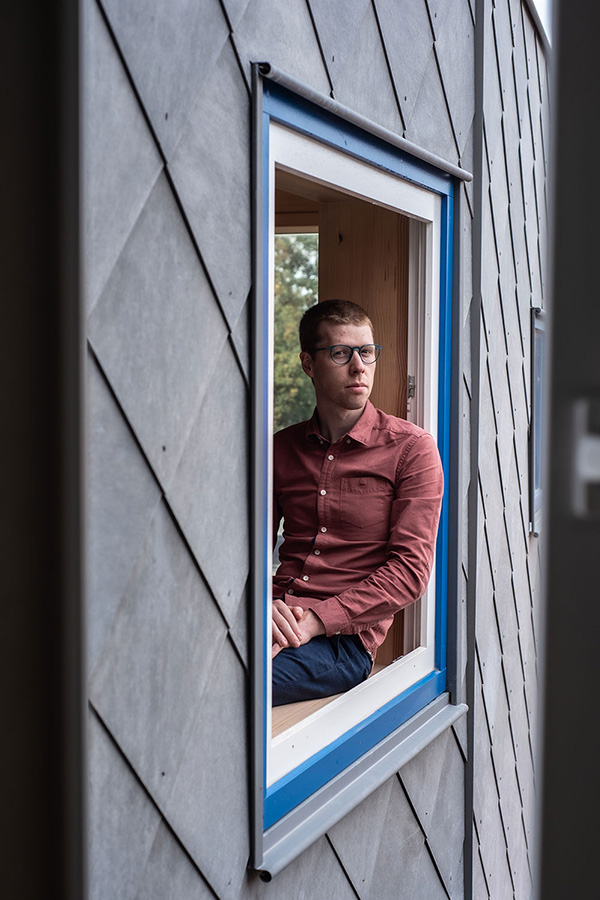 Jason Slabbynck
After studying Architectural Forming at the technical school in Bruges, Jason Slabbynck started his training as an architect at Sint-Lucas in Ghent. In 2012 he graduated as a Master of Science in architecture. After working shortly in Brussels he moved to Rotterdam to work in the international office of MVRDV. Their he worked on the new collection building for the Boijmans van Beuningen museum which is now being constructed in Rotterdam. In 2015 he moved back to Bruges to start at Architectuuratelier Dertien12. Their he worked on a wide range of projects including the creation of the Floating Island, an art and architecture installation designed by the south Korean office OBBA for the Triennial in Bruges.

But the working field of Jason Slabbynck reaches much further than just architecture. Since he graduated in 2012 he founded his own art and architecture studio mxmxm. The studio focuses on making comprehensive projects, on different scales, that trigger transformative experiences. Those projects – from (theatre) scenography to architectural installations – sometimes require active citizen participation, often include new technologies and always try to be readable to a large public. Our goal is poetic reflection and community building, provoked by an honest, minimal and innovative design as well as a multidisciplinary approach.

Recent projects include a scenography for the danceperformance Tinkling I, by choreographer Talitha De Decker, which toured in Belgium and The Netherlands, an architectural installation, Arc de L’Europe, in the harbor of Bruges for artfestival KONVOOI and the redesign of the scenography and museumshop of the Groeninge museum in Bruges.

Three aspects form a red thread through the works of Jason Slabbynck. Firstly his architectural background, through which he succeeds to make strong formal choices. Secondly, his desire to tackle projects that differ greatly from one another (from the design of a small object to the design of an urban master plan) with the same sensitivity. Thirdly, to let himself be challenged, again and again, by working together with artists from other disciplines.